You are at:Home»News»HVAC»Rolls-Royce demonstrates a full vehicle approach to interior refinement

With the recent launch of its new Ghost model, Rolls-Royce appears to have pulled out all the stops to ensure it achieves the pinnacle of interior refinement, with the entire car concept centered around the passenger experience.

For example, though Roll-Royce has always produced cars to be driven in rather than to drive, the Ghost’s 6.75-liter V12 engine is placed behind the front axle in order to achieve a 50/50 weight distribution. However, if the dimensions of the company’s previous model, the Goodwood Ghost, had been retained, the relocation of the engine would have reduced interior space. To counter this, the company increased the overall length by 89mm (to 5,546mm) and the width by 30mm (to 1,978mm), meaning no compromise was necessary.

Intense attention has also been paid to noise attenuation throughout the vehicle. For example, the doors are made from laser-welded aluminum, with a structural stiffness of 40,000Nm/degree, providing both structural benefits and low acoustic impedance, which the company says benefits interior noise reduction.

Steps such as this are the result of a process Rolls-Royce says it has taken to formalize a “Formula for Serenity’, which dictates the engineering and design approach in relation to acoustics. It states that the first element of this formula is embodied in the Ghost’s spaceframe architecture. Not only is aluminum used extensively, the chassis and body are constructed from complex forms, rather than flat, resonant surfaces. Both the bulkhead and floor sections are also double-skinned, sandwiching composite damping felts to reduce road noise intruding into the passenger suite. Larger sections of the architecture have also been created with specific access points for the installation of acoustic damping materials – the Ghost uses more than 100kg in total, applied in the doors, roof, between the double-glazed windows, inside the tires and within nearly all of the architecture itself.

The manufacturer says that once this highly insulated soundstage was created, the next element of its formula saw components that generate almost imperceptible sound waves being identified and modified. For example, it was found that the inside of the air conditioning ducting created an unacceptable level of wind noise so the surface finish was modified before production of the final components. Even drivetrain hardware was adjusted to create new Ghost’s near-silent soundstage – the diameter of the prop shaft was altered, and its rigidity increased to improve acoustics. 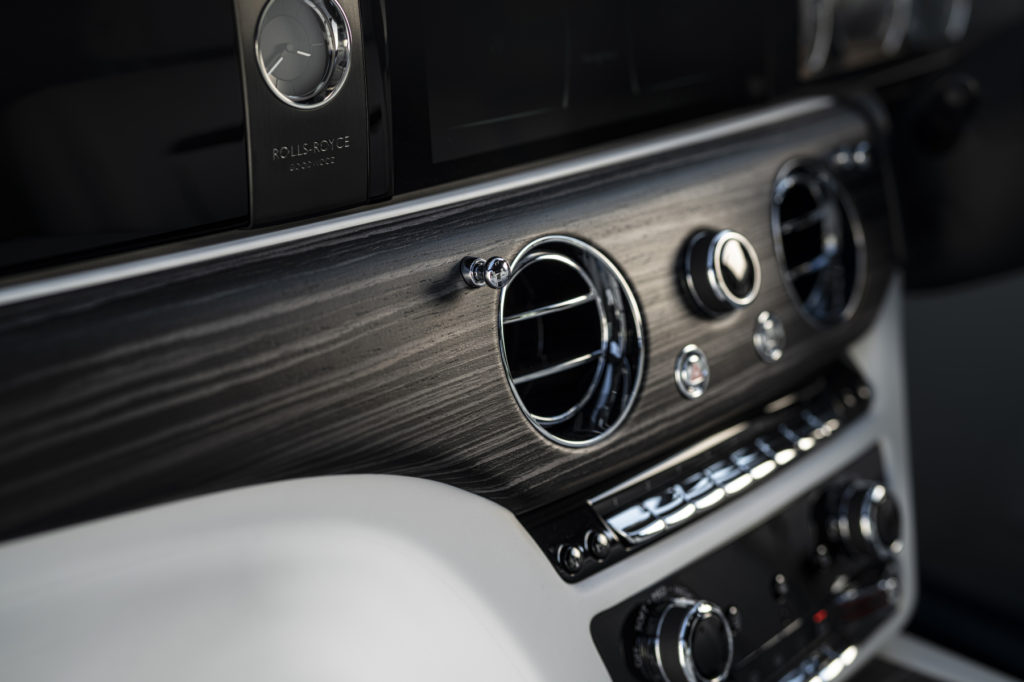 The final element of the formula, says Rolls-Royce, is harmonizing the car. Impressively, the marque’s acoustic specialists experimented with a completely silent interior, but found the experience to be disorientating. To overcome this, they elected to create a ‘whisper’, a soft undertone that is experienced as a single, subtle note.

To achieve this, each component had to be tuned to share a common resonant frequency. The seat frames in early prototypes, for example, resonated at a different frequency to the body, so damping units were developed to bring the noise together into a single note. Additionally, the large, 507-liter trunk cavity produced a low frequency that could be felt at highway speeds – ports were built underneath the rear parcel shelf that allowed these disruptive sound waves to escape and therefore better harmonize new Ghost’s overall acoustics.

Rolls-Royce’s pursuit of acoustic perfection also extended to the Ghost’s audio system. From early on in the architecture’s design phase, audio engineers were involved to ensure an ideal soundstage could be created. For example, resonance chambers have been introduced into the body’s sill sections, and the frequency response of the speaker component defined the chamber’s size and shape.

Away from the structural design, similar effort has been spent on other interior systems. For example, the company says its Micro Environment Purification System (MEPS) incorporates sensors to detect ambient air quality, automatically switching fresh air intakes to recirculation mode if unacceptable levels of airborne contaminants are present. This channels all cabin air through a nano-fleece filter, which is capable of removing nearly all ultra-fine particles from the Rolls-Royce’s micro-environment in less than two minutes.