You are at:Home»News»Displays»Audi Q4 e-tron to launch with augmented reality HUD

“Full electrification at Audi has so far been confined to the upper reaches of the range in our larger e-tron SUVs and e-tron GT grand tourers, so the launch of the Q4 e-tron into the core compact SUV segment will mark the point at which its influence really begins to radiate,” noted director of Audi UK Andrew Doyle.

“The Q4 carries the now familiar e-tron SUV’s DNA as the world’s best-selling German premium BEV into the class, and this preview confirms some fundamentally outstanding qualities that begin to paint a picture of a car that has every chance of decisively building on that success.”

The augmented reality head-up display projects information onto the windshield on two separate levels – a status section and an augmented reality (AR) section. Key information and symbols from specific assistance systems and from the navigation module are visually superimposed on the ‘real life’ area to which they specifically relate. They appear to be floating at a physical distance of roughly 10m from the driver and depending on the situation can even appear considerably further ahead in some cases.

The field of view for the AR content from the driver’s perspective corresponds to a diagonal of around 70in. Below it is a flat near-field area window, known as the status section. This displays information such as speed and traffic signs as static displays that appear to be floating roughly 3m ahead of the driver.

Powering the HUD is a picture generation unit (PGU), which is located inside the instrument panel. A bright LCD directs the light beams it generates onto two level mirrors, and optical components separate the portions for the near-field and distant areas. These mirrors direct the beams onto a large concave mirror. From there, they reach the windshield, which reflects them into what is known as the eyebox, and thus the driver’s eyes.

What Audi terms the AR Creator serves as the image generator on the software side. Incorporated into the processing unit of the modular infotainment platform (MIB 3), the AR Creator renders the display symbols at a rate of 60fps (frames per second) and adapts them to the geometry of the projection optics. At the same time, it calculates their location in relation to the environment, on which it obtains information via the raw data of the front camera, the radar sensor and the GPS navigation. Its software consists of roughly 600,000 lines of programming code, around 50% more than the entire control system of the first version of the Space Shuttle.

While performing its computing work, the AR Creator takes into account that there is always a slight lag between the identification of an object by the sensors and the output of the graphic content. To account for this, multiple computations are performed continuously to ensure that the display in the eyebox does not jump into the wrong position.

For example, the AR Creator uses the most recent data to make a predictive calculation of the car’s continued forward movement. In a further computation, it estimates the vertical movement on the basis of data supplied by the camera, the radar, the sensors of the stabilization control (ESC), and the height sensor system integrated into the vehicle suspension. These insights are incorporated into a shake compensation operation, which takes place a few milliseconds before the picture is displayed, in order to prevent any disruptive shaking of the display. 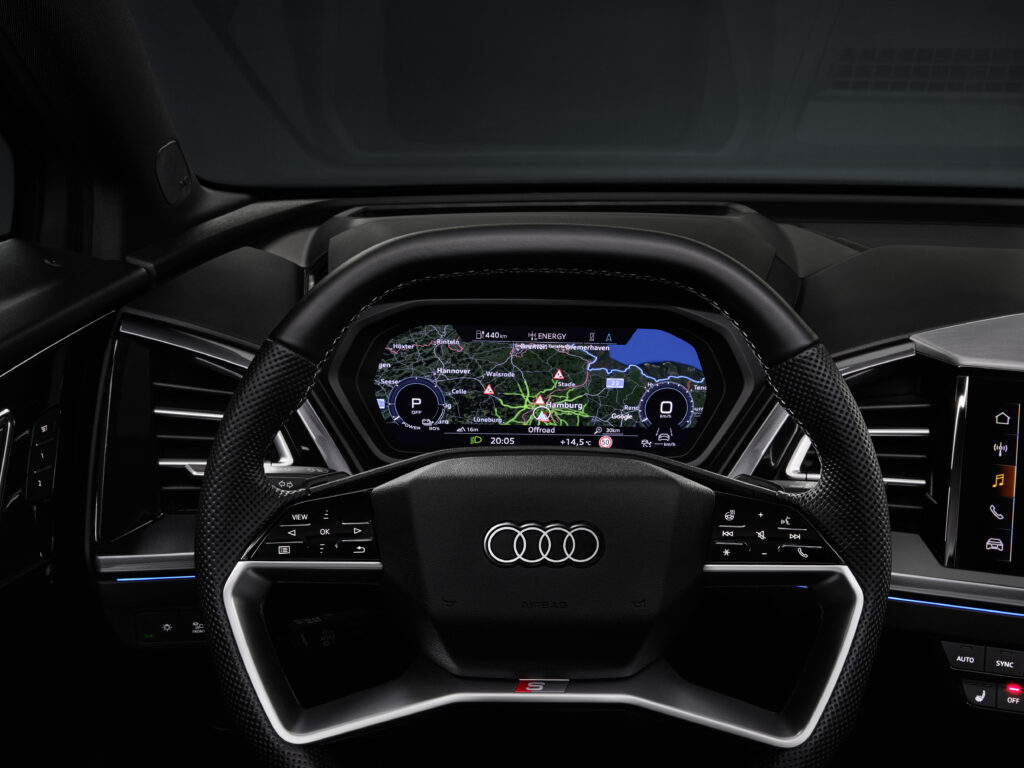