You are at:Home»News»HVAC»Plexiglas vents add dash of light and color to latest SEAT models

Spanish car manufacturer SEAT gave its popular Ibiza compact car and Arona compact SUV models a facelift in 2021. One of the most striking changes to the interior was the use of round, colorfully illuminated air vents with light guides made from a light-scattering Plexiglas molding compound from supplier Röhm.

The contours of the air vents light up in different colors depending on the equipment line: deep red or cool white for the Ibiza; red, light green or honey yellow for the Arona.

“Both models were due for an interior facelift, and we had the idea of using the air vents as a decorative illuminated element,” explained Carolina Gómez Sánchez, color designer in the Color & Trim team at SEAT. “The use of lighting technology adds to the SEAT Arona’s and Ibiza’s interior personality. The driver and passenger side newly designed air vents benefit from surrounding LED lights. It means the cabin space is more in-sync with the customer’s personality.

“This functional component often looks technical, and we wanted to liven it up with colorful detail. It suits the image of our classic SEAT Ibiza to a tee, as it is a car for people who are young at heart. Many people see their car as much more than just a means of transport. It is a symbol of freedom and a reliable daily companion – one in which they want to feel at home and have fun. This also explains the desire for individuality when it comes to choosing equipment.

“We decided early on in the development cycle that we would use Plexiglas for the contour lighting on the air vents, as its special optical properties make it quite simply the best material when it comes to interplay with light.”

Gómez Sánchez and her team had two main requirements for the material: it had to guide the light in an even intensity throughout the entire component and scatter the light homogeneously.

The light guides on the air vents in the two SEAT models are made from Plexiglas LED 8N LD12. Structures on the injection molded rings also ensure that the light spreads outwards radiantly. The manufacturer starts out with the clear version of the material and backs it with colored plastic depending on the model and equipment level.

“We developed these special molding compounds specifically for LED contour lighting,” added Gunther Benz, product manager, automotive, Molding Compounds business unit. “The diffuser particles in the material ensure that the light fed in via the contours is extracted homogeneously across the area of the component.” As this type of illumination also depends on the distance covered by the light, Plexiglas LED LD is available in four versions, allowing light guides in lengths of up to 96cm.

“Now that we have successfully brought illuminated air vents to series production, we can continue to work on other creative ideas, such as developing new colors and effects.” 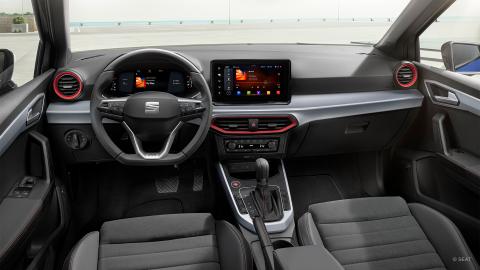