You are at:Home»News»HVAC»Smart air-conditioning for Volkswagen ID.7

For the new ID.7, Volkswagen is introducing an air-conditioning system that cools or heats the vehicle’s interior faster, before occupants even enter.

The new feature is made possible by electronically controlled air vents that move air throughout the vehicle interior when the driver approaches with the key. Voice commands can also be used to control the smart and automated air-conditioning system. Furthermore, the system can consider the position of the sun for interior cooling, in addition to storing individual user preferences.

The system is capable of sensing the exterior temperature when the door is opened, enabling smart air vents in the cabin to distribute hot or cold air quickly over a large area by using dynamic horizontal movements. If passengers are inside the vehicle, airflow can be redirected straight at the body or used for indirect ventilation of the interior space, depending on personal preference. The vehicle is the German OEM’s first with such an intelligent control system.

The climate control functions are located on the top section of the vehicle’s 15in infotainment display, enabling ease of use with a tap of a finger. Via the touchscreen, all smart air vents can be digitally controlled at the outlets. Additionally, the strength and direction of air movements can be adjusted and saved individually. Temperature is controlled using backlit touch sliders.

The ID.7’s digitally controlled air-conditioning system can also be activated using voice control, with such phrases as “Hello Volkswagen, my hands are cold” resulting in warm air being directed at the hands on the steering wheel for around five minutes.

If the automatic function is activated, then the ID.7’s smart system reacts to the outside temperature. Using a sensor in the windscreen, the system can detect the position of the sun in conditions with high outside temperatures and high solar intensity. If the sun is shining on one side of the vehicle, the ID.7 adapts its air-conditioning to be stronger in these warmer zones – starting with the vehicle interior, and then in the direction of vehicle occupants. 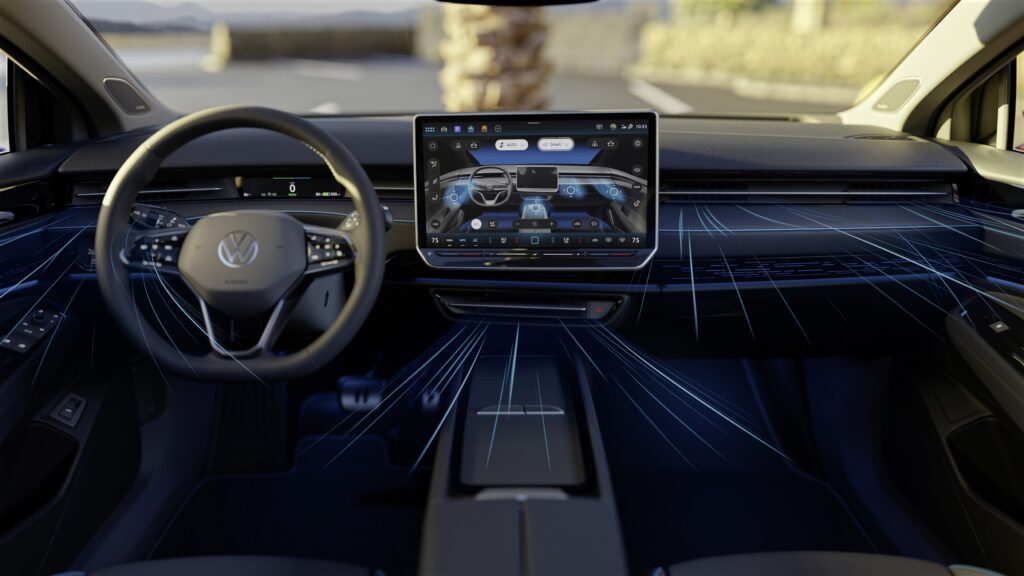