You are at:Home»News»Dash»Continental secures first order for pillar-to-pillar dash display

Continental says it has received its first major order – from a global vehicle manufacturer – for a pillar-to-pillar display in a production vehicle. By developing a display solution that extends across the entire width of the cockpit, the technology company says it is continuing the trend toward larger displays, which has been ongoing for many years.

Continental highlights that the integrated display solution extending from one A-pillar to another provides space for a growing number of vehicle functions and digital services, as well as communication and infotainment applications. It is scheduled to go into volume production in 2024.

“A driving experience that is digital and safe is becoming the most distinctive feature of modern cars. The size of the displays and their intuitive operation play a central role here. In short, what used to be horsepower is now screen diagonals and user experience,” said Dr Frank Rabe, head of the Human-Machine Interface business unit at Continental.

“With the user experience, we already create value today. Each year, we supply a total of around 120 million products for human-machine interaction, equipping one in four cars worldwide. With the increasing significance of automated driving, the way in which we spend our time in cars is becoming even more important. As a result, there is also a growing need for solutions and services for the in-vehicle user experience.”

According to Continental, the classic dash layout of speedometer, rev counter, fuel consumption gauge is a thing of the past. Given the multitude of new vehicle functions and digital services that are pushing into cars with increasing connectivity, traditional pointer instruments and center consoles are now too rigid and inflexible. The company believes that an exclusive focus on the driver is also no longer appropriate for the wide range of communication and infotainment services now available for vehicle occupants. 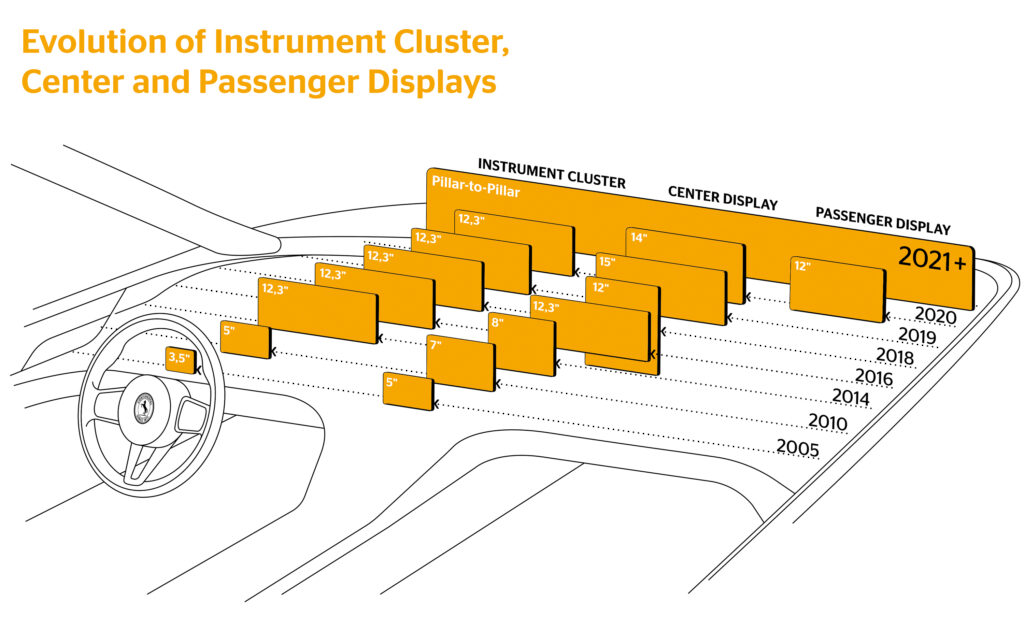 As a result, displays have been getting bigger and bigger for years. This also poses design challenges, which over time have resulted in different shapes: from flat displays to curved ones that fit seamlessly into the cockpit, into V-, C-, L- or S-shape displays, accommodating both the driver and the front passenger, so that the displays can be reached with minimum effort. As the size increases, several displays are connected under one surface to form a single unit. Creating invisible transitions is not the only crucial aspect here. Sensors and cameras that record driver behavior can be seamlessly integrated. Convex and concave shapes are also increasingly being used so that the user can intuitively perceive the operating elements.

The technology company notes that it is also driving forward the transformation of the vehicle electronics architecture with concepts such as a high-performance computer for the cockpit. A few high-performance computers will eventually replace the previous large number of dedicated control units, so Continental claims the pillar-to-pillar display is the next evolutionary step and an expression of the increasing convergence of the car to a mobile data center.