You are at:Home»Features»Renault looks to the horizon, with a greater emphasis on interior comfort and connectivity

Renault’s reputation has been built on producing small, desirable hatchbacks at an affordable price. Outlandish exterior designs and powerful engines won plaudits while the interior often played second fiddle. The Clio remains Renault’s magnum opus, but in the past decade the brand has spread to nearly every other automotive category, with notable success in the electric vehicle (EV) and compact-SUV markets. Renault is even making inroads in the luxury SUV segment with its second-generation Koleos. 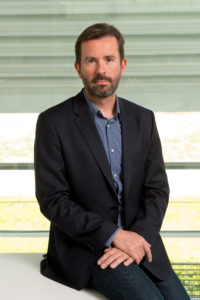 “The new Koleos is an important step for us,” explains Antoine Genin, vice president of interiors, trim and color at Renault. “We were a specialist in small cars 10 years ago and now we’re building in all categories. Together with the Espace and Talisman, the Koleos makes up the high end of the Renault range.”

To truly compete in an already oversaturated D segment, Renault needed to create interior spaces that match the external desirability of its vehicles. With this in mind, the latest Koleos received an interior facelift to further enhance its high-end qualities.

“On the Paris Initiale version, for example, we offer a choice of Nappa leather upholstery in ‘black titanium’ or ‘light sand gray’,” adds Genin. “The seats have also been embellished with double topstitching to emphasize the design, and there is the option for a sunroof that extends over the rear seats. All these things are indicators of high-end models.”

A key element of the 2019 Koleos is the large 8.7in navigation and infotainment screen positioned vertically near the center of the dashboard. The tablet is fully compatible with Apple CarPlay and Android Auto, enabling the occupants to remotely synchronize and mirror their mobile devices. A voice-recognition system activated from the steering wheel also enables the driver to manage phone calls, emails, apps, satnav and radio with minimal distraction.

Other new touches include satin chrome inserts on the steering wheel, gear lever and air vents, as well as foam materials on the dashboard and door trim. Changes have also been made to the seating comfort and configurations, with a reclining rear bench seat and extendable front seat cushions. The driver’s seat can even be equipped with a massage program.

However, even with these improvements Genin acknowledges the customary design of the Koleos’s interior, in that all these features can be found on other high-end SUVs across the market.

“For the D segment you have to follow codes. You cannot do something totally different, especially for a brand like Renault which is a relative newcomer to this segment,” he says. “The Koleos is in a market that doesn’t expect a revolutionary design in the interior. We first have to catch the competition, then we can be innovative.”

While Renault may be playing it safe with the Koleos, the company has revolutionary plans for its interiors
in the B and C segments, starting with the upcoming versions of the Clio, Zoe and Captur.

“With the Captur we want to target customers who don’t need very big cars but still want to have a comfortable, dynamic looking interior with lots of features,” explains Genin. “This is where Renault is starting the new revolution, in the interior, starting with the new Clio Mark 5 in October 2019, and later the Captur and Zoe. With the new Clio 5 we undertook an interior revolution, with new architecture, interior layout and form language.”

Central to the overhauled interior is the ‘smart cockpit’, featuring a new-look steering wheel with backlit controls and more compact airbag compartment. This is complemented by a 10in digital instrumentation meter and navigation system – a first for the Clio. The cockpit also boasts a 9.3in multimedia screen – the biggest used by the company to date – which is angled toward the driver to minimize distraction. It comes equipped with the latest infotainment, navigation and EasyLink applications.

“With a bigger screen we can bring a lot more features,” says Genin. “We take our inspiration from the smartphone world, because everyone has a smartphone and they expect it to be fluid and fast, to quickly swap from one page to another. Of course, in a car you’re expected to concentrate on the road, so we’ve put a lot of work into the passive quality of the system.

“The multimedia experience is different from some of our competitors’ systems because we wanted to keep it very simple,” he says. “The screen, for example, is vertical rather than horizontal because you can see more when you follow your route. This is also the standard format when you use your smartphone. We started with the customer requirements and then designed the cockpit, rather than designing for the sake of design.”

To complete the look, Renault raised the position of the center console for enhanced ergonomics, with a shorter gear lever for a more comfortable grip. The skin of the console can also be customized to suit a particular interior design scheme (choice of 18) and features special lighting on its outer edge. It also boasts a number of storage compartments, one of which contains a wireless smartphone charging area.

Furthermore, Renault introduced several new advanced driver assistance (ADAS) functions, such as its highway and traffic jam companion and adaptive cruise control systems, all of which are activated or disengaged using the Easy Link multimedia touchscreen.

Like the Clio, the Captur and Zoe both feature the new smart cockpit, although each interior has received its own subtle alterations to suit the model’s target market. The Iconic version of the Zoe, for example, has been fitted with 100% recycled seat upholstery made from safety belt scrap and plastic waste (PET), to appeal to the environmentally minded driver. The material is created using carded yarn manufacturing, rather than melting or chemical transformation, resulting in CO2 savings of up to 60% over traditional materials. 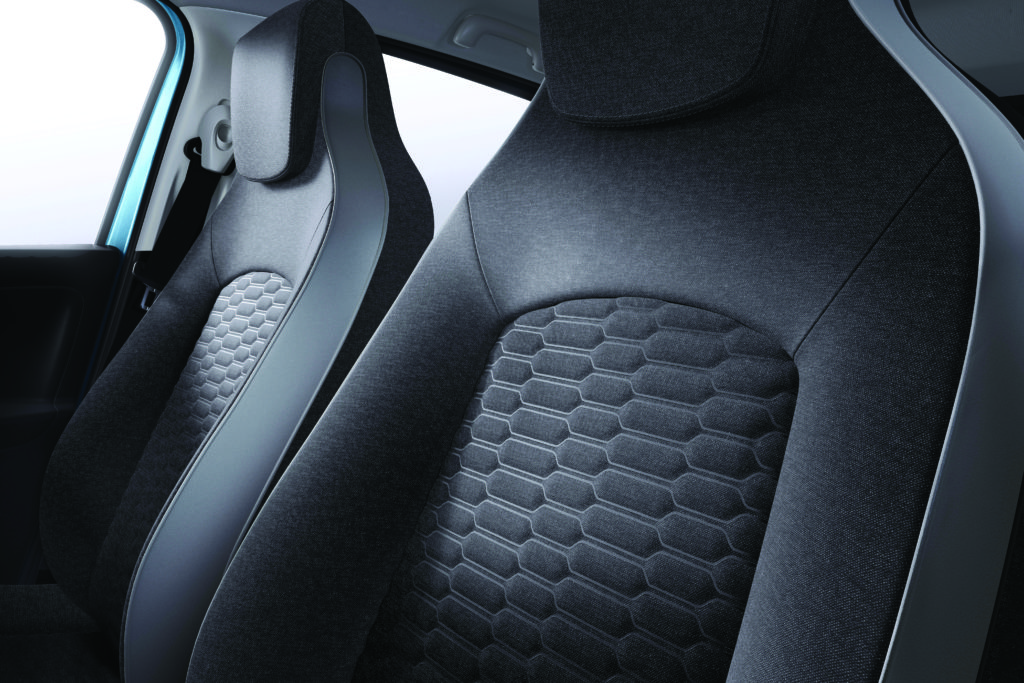 “We’re also looking at animal-free or vegan interiors for our electric vehicles,” Genin says. “We already use recycled fabrics for the Zoe’s dashboard and seats, but this is something we can take further. We’re not a premium brand; we make popular cars, so this is certainly a new direction for us to go in.”

Like the Clio, the new Captur features a redesigned floating center console with a special pad for wirelessly charging mobile devices. For vehicles fitted with a dual clutch transmission, the floating center console features an ‘e-shifter’ gear selector with an illuminated outer edge that can also be customized to suit the rest of the vehicle. By raising the console and reconfiguring the cockpit, Renault has been able to introduce even more storage space to make full use of its compact design.

Likewise, the extra room afforded by a new electronic parking brake on the Zoe means the center console has double the storage space of previous versions and comes complete with a chrome electronic gear selector and driving mode toggle.

Looking to the future, Renault is determined to stay ahead of the curve and incorporate the latest technologies into its vehicles wherever possible: “We are already thinking about the next generation as we are facing many future revolutions,” says Genin. “The car of tomorrow will highly likely look very different from the car of today. It is the first time in 30 years of designing interiors that no one can be certain about what the future holds. It’s like working with a blank sheet of paper, it’s very exciting.”

One such revolution, according to Genin, will be the advent of autonomous driving, although the exact impact this will have on interior design is less than certain. “Autonomous driving will not come as quickly as everyone initially thought, but we will have to take into account a design where the driver isn’t driving all the time.”

According to Genin, the combination of autonomous driving with electric drive systems will provide more space in the cabin, allowing a greater focus on display technologies and connectivity, although the former will likely change from what we know today.

“The electric drive system means you can hide components like the heating, ventilation and air conditioning
[HVAC] under the hood, meaning there’s more space in the cabin,” he says. “There will also be a revolution in what comes after the screen. Displays can only get so big in a vehicle, so we will probably have head-up displays projected on the windshield and passenger windows instead.”

Although these developments hold great potential for the auto industry, Genin stresses the danger inherent in focusing too strongly on technology and losing the values that distinguish a brand from other manufacturers.

“Ultimately the most important thing that makes a difference is the brand identity in your car,” he says. “We have a unique chance to find added value as there are so many technological possibilities, but we have to remember what makes a Renault different from other OEMs. It’s not enough to be better; you have to be unique.”