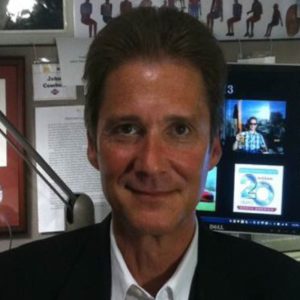 Describe your presentation.
Advancements in science and engineering come when better tools with more precise measurements become available to the community. Human body finite element analysis has matured to a state allowing dynamic simulation of any possible vehicular event from pre-crash braking, using active muscles, to analysis of brain or internal organ injuries in the event of a rapid deceleration event or crash. A few HBMs (human body models) with these advanced human simulation capabilities have been developed, including a detailed and simplified family of models by the Global Human Body Models Consortium. The state of the art in HBM is presented.

What does the future of automotive interiors hold, and how will technologies and design change for the autonomous era?’
If we look at the major changes in automotive interiors in the past 50 years, they have been driven by technology improvements in safety, such as head restraints, seatbelts and airbags, knee bolsters or knee airbags, FMVSS 201-compliant designs for the instrument panel and child restraint (LATCH) hardware. Other improvements in environment and dynamic performance have had some impact on interior design due to the movement toward elimination of manual transmission and the associated shift lever and center tunnel (the ‘hump seat’). Advances in electronic sensors and controls, materials and comfort/convenience features have also improved the onboard experience for today’s occupants (HMI, automatic temperature control, etc). Future interiors will continue these trends as technology continues to advance. The key is providing better design tools for engineers to digitally analyze the impact of these new features on the well-being of occupants. Societal changes such as the aging of the population, the popularity of ridesharing and the promise of autonomous vehicles will continue to shape the design and features of automotive interiors. A key paradigm shift is still needed within the industry: designing for humans! Too many of the tools and design decisions being used today are based on outdated standards with limited consideration for human diversity in anthropometry and abilities.

What does the state of the art in HBM look like?
The state of the art in human body modeling is constantly changing due to advances in our understanding of the diversity of human physiology and injury tolerance, and the tremendous improvements in computing technology and power. First-generation human models, such as lumped-mass models and finite element models, were limited to kinematics and indirect injury indices such as force or deflection. Second-generation HBMs expanded to reflect more realistic physiology and measure stresses and strains for more direct measurement of real-world injury causation.

Interiors increasingly reflect and accommodate human diversity such as gender, age, physical ability and body habitus (size and shape). The GHBMC family of models were created to address this wide range of real-world occupants. Male and female models were developed based on the unique physiology of each gender. Elderly models are currently being developed, which reflect the physical changes such as rib cage geometry, lordosis, bone density and calcification. Today, computational improvements allow repositioning and morphing to be easily and quickly applied to match specific occupants, which can greatly improve engineers’ ability to simulate real-world positions and real-world crashes. Today’s HBMs include fairly detailed brain/spinal cord and internal organs (digestive and circulatory), allowing us to investigate injury mechanisms such as concussion, whiplash, seatbelt syndrome, etc to an extent never possible before. Active muscles are included in state-of-the-art HBMs, not only for pre-crash kinematics but also to investigate the changes in injury mechanisms that occur based on ‘relaxed’ or ‘flexed’ muscles during a crash.

How accurate are the simulations?
It should be noted that accurate simulations are still currently limited by computing power and biomechanical knowledge. Computing power has been increasing based on Moore’s Law; however, there has been a reduced focus on investments in biomechanics as safety investments are increasingly focused on accident avoidance, ADAS and AVs. As an example, child models are severely limited by a lack of child biomechanics data, specifically material properties. HBMs of pregnant females and their fetuses have been developed but are again limited due to a lack of data and investment in research for crash safety. Improving the accuracy of HBMs in the future is really only limited by investments in biomechanics R&D. With sufficient will and investment there is almost no limit to how accurate HBMs may become. In the future we can imagine including full circulatory and nervous systems, refining mesh sizes to model, perhaps even down to the molecular level!

What do you hope will be the ultimate end result of human body finite element analysis?
The objective of the GHBMC is to consolidate worldwide research and development activities in human body modeling into a single global effort to advance crash safety technology. The mission of the GHBMC is to develop and maintain high-fidelity finite element human body models for automotive crash simulations. However human body models have uses beyond the specific objective and mission of the GHBMC. HBMs are quite simply a better tool and an essential need beyond crash safety. Following a GHBMC workshop held in the Detroit area, Dr Ripi Singh, chief innovation officer at Marutee Engineering Services, wrote a white paper called Human Body CAE Modeling – Image Next in which, after having driven the evolution of various simulation techniques in aviation safety in its early days, he imagined many possible applications [see image below]. The main goal is simple: improving the quality of life for humans using human-centric design methods and tools. Human body finite element models are a better tool, and are essential to improve human quality of life in transportation and any area concerned with understanding how the human body acts or reacts. 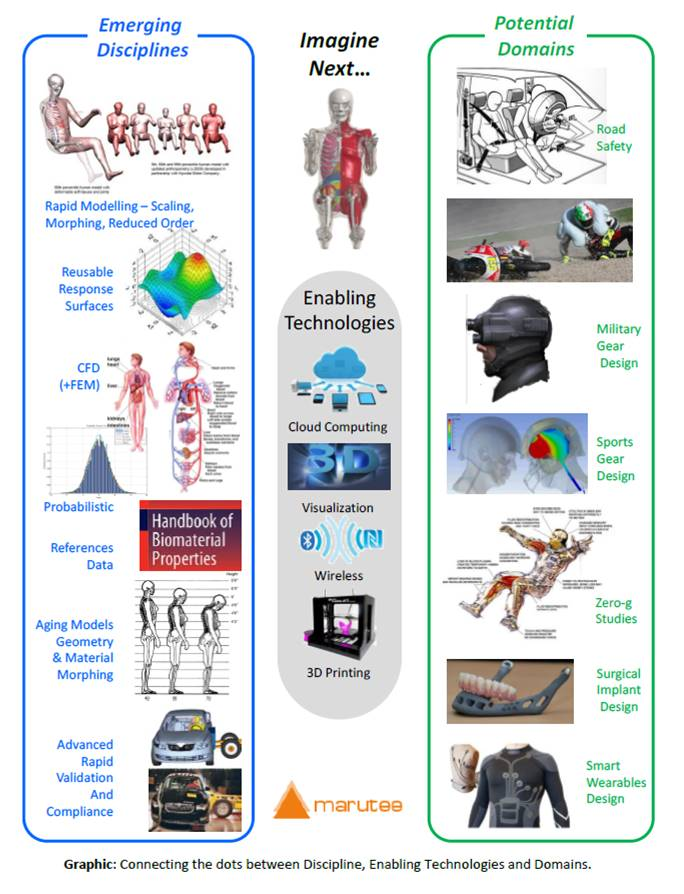 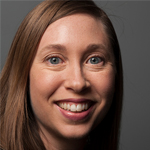