Škoda has unveiled its latest Vision 7S concept, replete with an interior layout that capitalizes on the car’s EV underpinnings. Highlights include two distinct interior configurations – Driving and Relaxing – with the company saying it has tried to strike a balance between haptic and digital controls. It also features an innovative child seat, which is mounted in front of the second row of seats on the center console facing away from the direction of travel.

Capable of seating seven passengers, the interior is intentionally symmetrical in an attempt to provide all passengers with the same sense of space. The upper line of the instrument cluster continues into the door panels, completing the wrap‑around design, while the wide, horizontal dashboard extends to the doors.

The two different interior configurations rely on the rotating central touchscreen and sliding elements. While driving, all the controls are within easy reach for the driver, and the central 14.6in touchscreen is oriented vertically for enhanced accessibility and information stacking. When charging or stopping, the Relax mode can be selected at the touch of a button in the center console.

The interior transforms with the steering wheel and instrument cluster sliding backward away from the driver and passengers to create additional space. The first-row seats rotate inward and recline for extra comfort, also allowing the rear passengers to view the screen. The seats in the second row also recline.

Škoda says that it reconceptualized the car’s HMI from the ground up, emphasizing the harmony between the haptic (manual) and virtual (on-screen) controls. Everything was designed to simplify the user experience. In Drive mode, the driver benefits from a head-up system displaying the most important driving data and an 8.8in digital instrument display for extra information.

The center of the interior is dominated by the large, rotating 14.6in screen, the largest ever installed in a Škoda car. In Drive mode the display is oriented vertically, allowing for information to be stacked; the upper area of the screen, for example, is dedicated to important visual content such as the map and navigation guidance, while the lower area is easy to reach and control.

The screen is supported by an ergonomically placed hand rest atop the center console. The user can adjust the amount of information on display by swiping up or down. In addition, the menu widget can be used to scroll through various functions. For instance, the baby camera image can be placed anywhere in the user-defined area. The remaining area could be used in high resolution for maps, for example.

In Relax mode, with the screen oriented horizontally, user-installed apps can be used for watching films or gaming. Given the longer distance to the screen when the seats are reclined, the infotainment system can also be operated by smartphone.

The redesigned center console features six additional buttons that give the driver direct access to the infotainment, phone, vehicle settings, navigation and app menus; the sixth button can be user-assigned. Below are three large rotary controls. The two outer dials are dedicated to climate control; the middle one controls the screen content and can be used to zoom in and out on the map and scroll through lists. Beneath these are two buttons for switching between the Drive and Relax modes, and a dedicated volume scroll wheel.

The position of the child seat is likely unique and mounted in the safest place in the vehicle. It is integrated into the center console, which extends to the second row of seats, facing away from the direction of travel. This means the child is optimally protected, and the passengers in the second row can always keep an eye on it. An optional interior camera in the rear roof area can also transmit a video of the child to the central infotainment display. 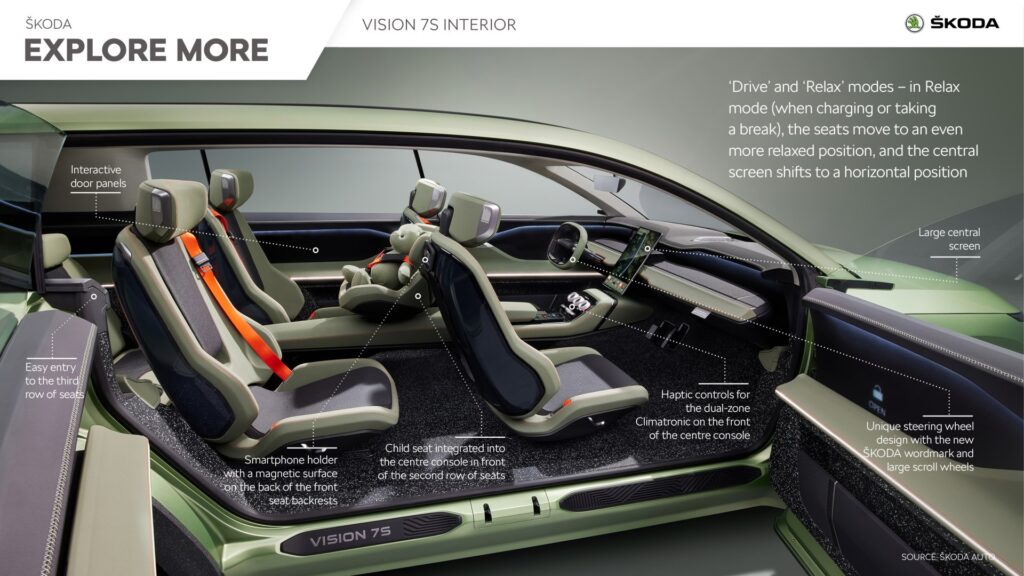